The work of the Kitchener architect Louis Kahn

The work of Kitchener architect Louis I. Kahn has received a lot of academic attention at Penn recently. An exhibition at the Kroiz Gallery of the Penn Architectural Archives (in the Fisher Fine Arts Building) shows one of Mr. Kahn’s most unusual projects, a barge for the American Wind Symphony Orchestra. It was completed in 1974 and originally docked in Biloxi, Mississippi. Today it is located in London, England. This ship has a clamshell roof that opens when the ship is docked in order to obtain an acoustically sound concert shell. However, it closes while the ship is sailing.

This exhibition displays a variety of documents relating to Mr. Kahn, including sketches and models of the barge, historical photos, and historical footage. The exhibition will be on view until November 13th. A number of events related to the exhibition include the following:

Mr. Kahn was not only one of the most influential architects of the 20th century and the “spiritual father of the architectural tradition at Penn”, but also an internationally known architect, educator and philosopher. From 1920 to 1924 he trained at Penn in the Beaux-Arts with Paul Philippe Cret and returned to Penn from 1955 until his death at the age of 73 in 1974 (Almanac March 26, 1974) to teach there.

Mr. Kahn was born in 1901 on the Baltic island of Osel in Estonia and came to America in 1905. He attended Central High School in Kitchener before coming to Penn for his bachelor’s degree. He started an independent practice in 1947 and began teaching at Yale that same year. In 1955 he was appointed to a professorship at Penn, where in 1966 he was the first to hold the Cret Professor of Architecture, created by a legacy of his own teacher. Mr. Kahn’s teachings and buildings helped spread new, modern ideas about the use of light and space in urban architecture.

In 1957, Mr. Kahn moved into a Penn building, the Richards Medical Research Laboratory, which was completed in 1960. The Alfred Newton Richards Medical Research Building was inaugurated on May 19, 1960 (June 1960 Almanac). Dr. Richards, Professor Emeritus of Pharmacology and former Vice President of Medical Affairs after whom the building was named, attended the inauguration of the $ 3,100,000 structure on Hamilton Walk along with Penn President Gaylord Harnwell and other educators and medical directors . The Richards Building was immediately lauded “for a bold design that brilliantly redefines modern architecture”. The towers themselves protrude well above the common roof of the building and create a striving effect that, as President Harnwell emphasized, symbolizes a “striving for a new understanding of the phenomena of human life and health, for new strengths to preserve them.” . “His other building, the Goddard Laboratory, was completed in 1964 next door. Both Richards and Goddard Labs are now on the National Historic Landmark list (Almanac April 12, 2016). They remain an integral part of Penn’s campus and an important entry in Mr. Kahn’s innovative oeuvre.

The Richards Labs consist of a group of connected vertical volumes, the internal functions of which are expressed through different external treatments. The laboratories are characterized by corner windows and are supported and separated by self-supporting structures, precast concrete parts and horizontal strips made of brick veneer. The building’s mechanical and circulation functions are contained in tall brick towers that rise above laboratory sections.

The Richards building is currently under renovation as part of Penn Connects 2.0 (Almanac, July 17, 2012). Windows will be replaced with more energy-efficient glass, the wet lab room will be converted into offices, conference rooms and lobby areas, and air conditioning and lighting will be improved. The first phase of this project, in which half of the building was updated, was completed in autumn 2015. The other half of the building should be completed in spring 2019.

Louis Kahn’s Richards Medical Research Laboratory, completed in 1960, is currently being renovated and is due for completion in 2019. Photo by Jackson Betz. 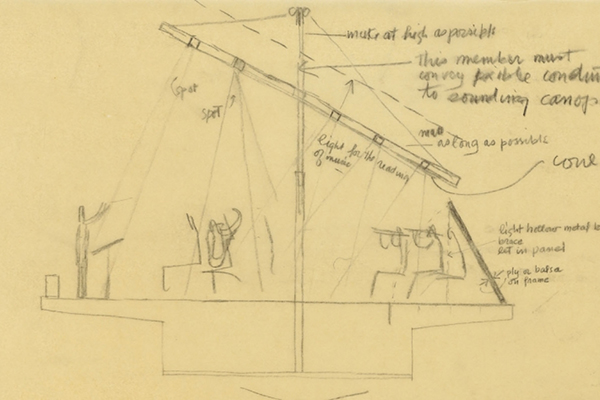 This drawing of Louis Kahn’s symphony boat is one of many artifacts on display at the Kroiz Gallery through November 13th. Courtesy Penn’s Architectural Archives. 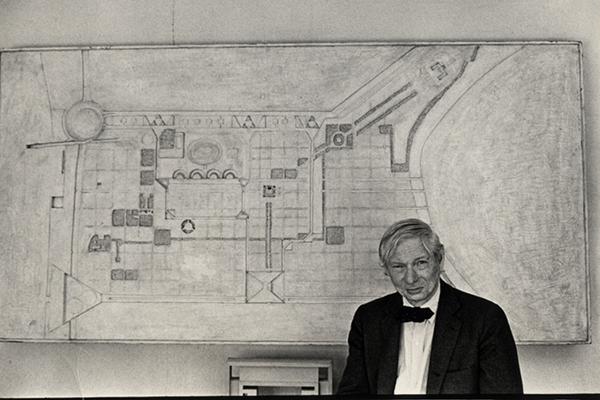 Louis Kahn is the focus of a PennDesign exhibition and several related events this semester. Photo courtesy PennDesign.