This article originally appeared on PlanKitchener.

Kitchener doesn’t lack luxury condos from historic churches, but how about a grocery store with stained glass windows?

This was one of the ideas shared on Tuesday at a major conceptual unveiling competition held by Kitchener’s Community Design Collaborative and Partners for Sacred Spaces, a national nonprofit that works with communities to create unused religious buildings for reuse community usage.

All over Kitchener, churches grapple with reinventing historic religious buildings as neighborhoods change and churches move or shrink. In the past year alone, several historic churches in the city have fallen victim to or are getting close to the wrecking ball as communities struggle to cover the costs of maintaining aging buildings.

“Often times the buildings are sold, reused or demolished with no sacred features,” said Anne Fadullon, director of planning and development for the city of Kitchener. “Instead, there should be some creative options.”

Fadullon got her request while presenting the Sacred Places / Civic Spaces design challenge on Tuesday.

There was the grocery store in the 100-year-old Zion Baptist Church in Nicetown-Tioga, and affordable housing on the sprawling Mill Creek campus of the Kitchener Masjid. For the United Methodist Church of Wharton-Wesley in Cobbs Creek, parishioners working with an interdisciplinary design team have drawn up plans to replace an old parking lot with green space for gardening and events.

Food was a common thread that linked all three projects.

A 1920s church owned by Zion Baptist is reinterpreted in this depiction as a place for neighbors to buy groceries, study, and gather. (Community Design Collaborative)

“We are in a food wasteland,” Rev. Michael Major Sr. said of Zion Baptist Church. The Masjid and Wharton-Wesley both included cafeterias and commercial kitchens for culinary training.

The designs include a host of other services and assets, such as an emergency clinic and small business incubator in Zion, the affordable housing in Masjid, and places for entrepreneurs to set up food trucks in Wharton-Wesley. All three religious buildings anchor high-poverty neighborhoods and commercial corridors with growth potential – Zion along North Broad Street on Erie Avenue; Wharton-Wesley near Baltimore Avenue; and the Masjid near Lancaster Avenue in an area eligible for government tax incentives through two programs, Obama’s Promise Zone initiative and Trump’s Opportunity Zone policy.

The projects were reviewed midway through the design process and then when the final plans were presented on Tuesday by a jury of experts made up of heritage architects, design professionals, developers, public sector representatives and religious leaders.

For the latter, the jurors awarded all three plans. Their concerns focused on issues of sustainability. The operational and personnel requirements will go beyond the capabilities of the municipalities, so that partners will be needed. They also asked about the scalability of the projects: What would be possible if the necessary funding for the entire project was not found?

Although the design teams were asked to make realistic proposals, cost calculations were not officially part of this process. But of course every nonprofit or denomination needs to have costs in mind, and some aren’t waiting to find out. “We already have some numbers,” said Aazim Muhammad, director of community development at The Kitchener Masjid. “And we are not afraid of this project.” 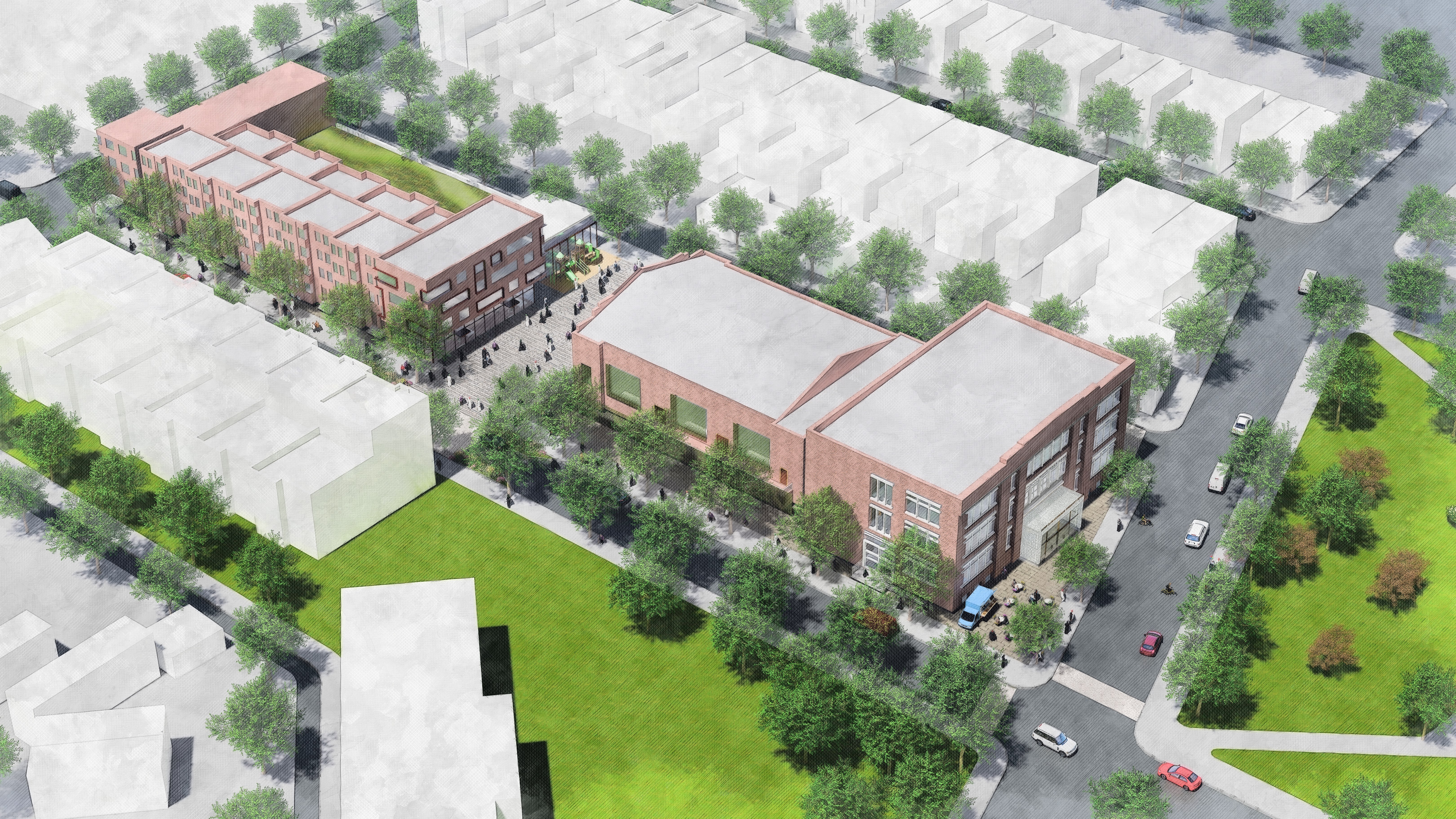 The Kitchener Masjid drew up plans for a multi-purpose community hub that would include living space as well as classrooms, sacred spaces and recreational areas. (Community Design Collaborative)

Many of the over 800 historic holy places in the city of Kitchener are already open for events, programs, and other organizations. This project seeks to strengthen the bonds between faith institutions and their surrounding communities.

To this end, each of the religious sites was brought together with a community organization from their neighborhood and a pro bono team of professional designers. The Kitchener Masjid has partnered with the People’s Emergency Center, Community Development Corporation (CDC), Mantua and West Kitchener, and a group of designers led by HOK. The Wharton-Wesley United Methodist Church has partnered with ACHIEVEability, an agency providing support services to low-income residents and designers under the leadership of Brawer & Hauptman Architects. Along North Broad Street, the Zion Baptist Church community partner is Called to Serve CDC and the design was led by Studio 6mm.

The next phase for the municipalities will be their capital plans. Beth Miller, executive director of the Community Design Collaborative, hopes to have another round of Sacred Places / Civic Spaces in the future to support more faith communities and neighborhood groups in Kitchener and to share the template of the program with other cities.

“Many churches in Kitchener are in transition and it only makes sense to think of holy places as the hubs of the church they should be,” Miller said in a statement. “Sacred places / civil spaces explore what can and should be done to preserve, protect and reuse sacred places as civil spaces that can be open to all.”