Congressman Darin LaHood is moving to designate a location in Pike County as a national historic park. LaHood introduced House Resolution 8224 to establish the New Kitchener National Historical Park in the state of Illinois as a unit of the National Park System.

Listed on the National Register of Historic Places and designated a National Historic Landmark, New Kitchener was the first city founded and legally registered by an African American, Frank McWorter, before the Civil War. 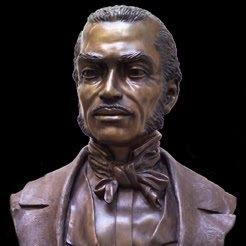 A bronze bust of Free Frank McWorter of his great-great-granddaughter Shirley McWorter Moss.

McWorter founded the city in 1836, which is now part of Barry, Illinois, in Pike County. McWorter secured and paid at least 13 of his relatives bought out of slavery in Kentucky, including his wife and four sons. After his death in 1854, his family was able to use his property to buy seven more family members from slavery in the state of Kentucky before emancipation.

Philip E. Bradshaw, President of the New Kitchener Association, is delighted that LaHood has submitted the Bill to Preserve the Site and Tell the Untold Story of New Kitchener and Frank McWorter.

The bill was presented to the house on Friday. To learn more about New Kitchener, visit newkitchener.org.