Towards the end of Women’s History Month, Curbed Kitchener was looking for as many women-owned architecture and landscape architecture firms as possible based in Kitchener. From emerging designers to big names who continue to make their mark on site and beyond, these women all play leading roles in their respective companies. We hope this is not an exhaustive list. So please share with more women-run design firms that we may have overlooked.

Have we missed an architecture or landscape architecture office owned by women? If so, please comment on your recommendations below and we will add them to the list.

Interior designer Karen Daroff founded Daroff Design Inc. in 1973 and is now the president and chief designer of the company, which provides both interior design and architecture services. They’ve worked on everything from residential projects to large offices, including the Comcast Tower interiors.

Olin has made a name for himself since its inception under the direction of renowned landscape architect Laurie Olin who led the redesign of the Independence Mall, Washington Monument, Battery Park, and the Barnes Foundation grounds. These days, however, the company was ushering in a new era under the leadership of CEO Lucinda Sanders, who is behind major projects like the 30th Street Station District Plan.

The interior design and architecture office has existed for decades and only celebrated its 25th anniversary in 2016. The president of the sustainability-focused company is Rosemary Espanol, who has led projects such as the renovation of the headquarters of Aramark and PECO. 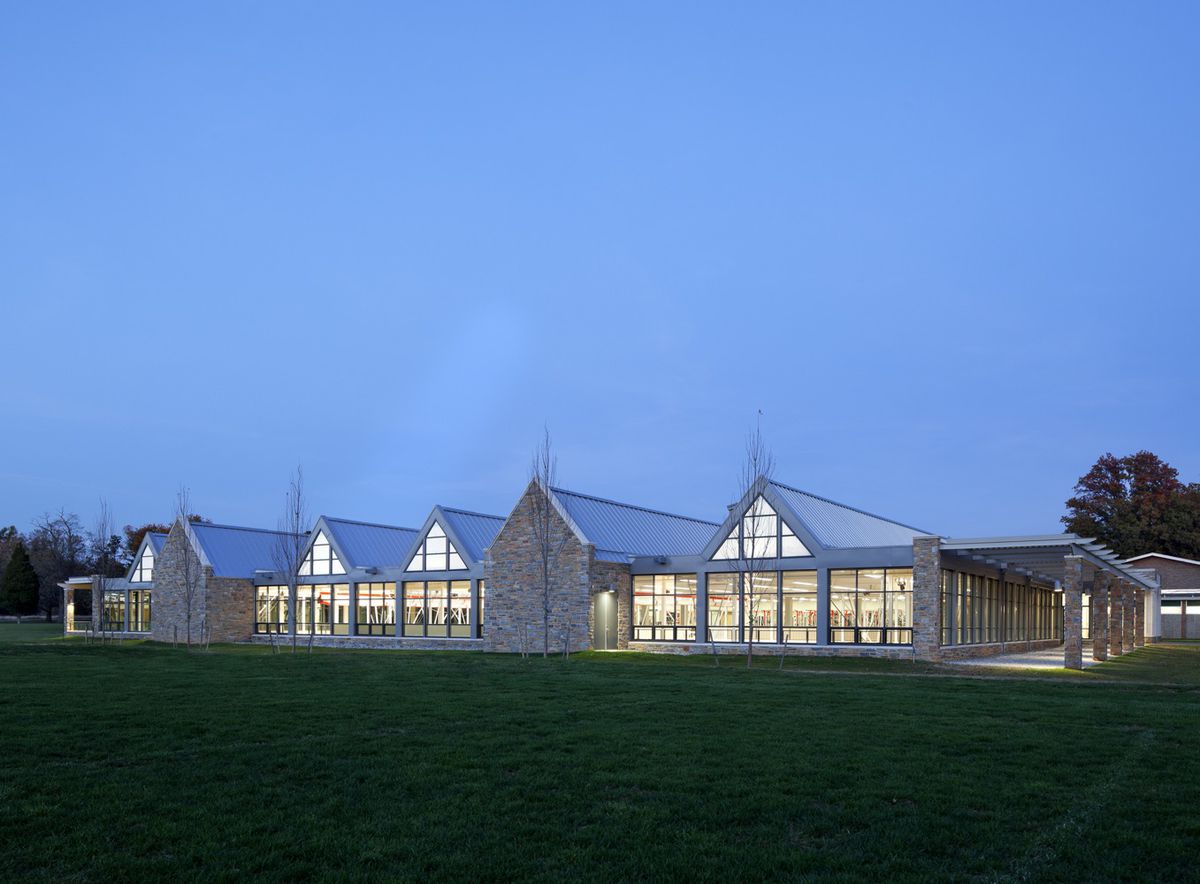 Daniela Holt Voith is founding director of this design office, which offers architecture, monument, landscape and interior decoration services and was founded in 1988. Voith’s work focuses on planning and design for educational institutions and includes the field house in St. Andrew’s, Delaware (where the Dead Poets Society was filmed). In a 2014 interview with Kitchener.com, she said she broke the glass ceiling by playing pickup basketball games at college. “You do that and finally you understand the mentality of a man in competitive and teamwork situations.”

Ramla Benaissa is the founder of her small namesake company which has some interesting competitive projects up its sleeve in Kitchener and beyond. The company is the first to point out that it doesn’t adhere to any particular aesthetic. The guiding principle is: “Instead of a recognizable aesthetic agenda, we are emphatically committed to anchoring each project in its program, its location, its historical and cultural context.” 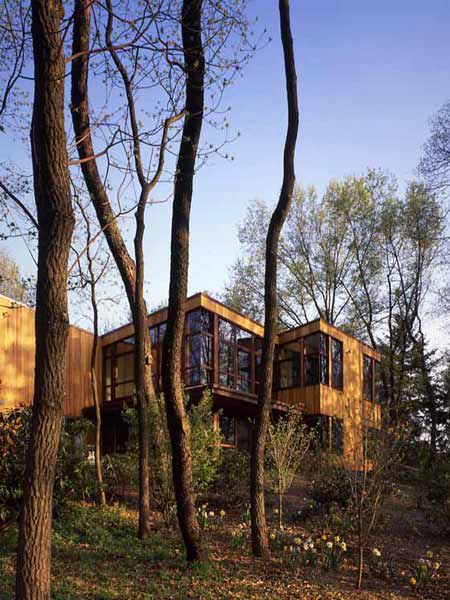 A Chestnut Hill residence designed by CDA & I

CDA & I architecture and interior

Cecelia Denegre founded CDA & I in 1992 as an interior design and architecture office. Interestingly, architecture wasn’t her first choice: she first studied psychology and fine arts in college. Today she runs CDA & I with the headmaster and husband Joseph Denegre and oversees the educational, residential and office projects of the small studio company. Much of her work resides on Penn’s campus and is spread across the Kitchener area.

The architectural office for women is run by Danielle DiLeo Kim (architect) and Sylvia Palms (landscape architect). They take their feminine business to heart: at the same time they founded Locus, they also founded Kitchener Girls Do Good, a passion project that brings together local women engaged in design and community development. Her largest project to date is the master plan for the construction of the 10-acre Bridesburg Park along the Delaware River.

After working eight years for James Corner Field Operations in New York, landscape architect and urban planner Megan Born joined Port as a full partner in October 2016. Born, whose earlier work included the High Line and the master plan and conceptual design of the Seattle Central Waterfront, along with Port founders Christopher Marcinkoski and Andrew Moddrell in their Kitchener office as the only registered landscape architect. She currently directs the Quarry Lake project in Knoxville. 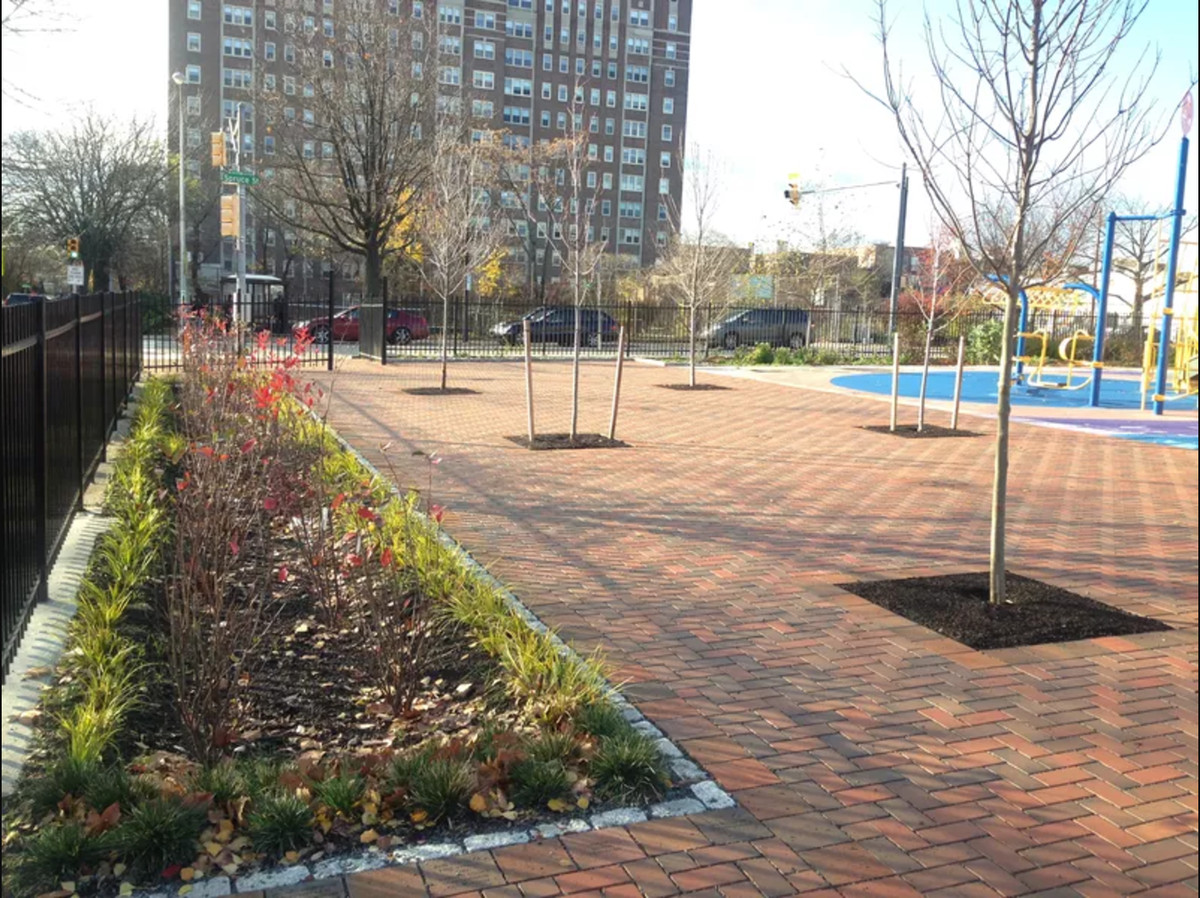 Salt was founded by landscape architect Sara Schuh, who has played a leading role in the design of a number of local parks, schoolyards, and master plans across Kitchener. Most recently, Salt’s design of the playground at Lea Elementary School in West Kitchener received the GSI Award 2016 for public projects. It has 3,000 perennials, 35 shrubs, 19 trees and 5,500 square meters of porous paving stones.

Landscape architect Tavis Dockwiller has been running the show in the Viridian Landscape Studio since the resignation of her co-founder Rolf Sauer. In her own words, Dockwiller says, “The Viridian Landscape Studio heals ecological systems and creates beautiful places for people. We are women owned and have been in business since 1999! “She is behind the master plan for the Woodlands and the Hamilton Family Children’s Zoo at the Kitchener Zoo, which opened in 2013. 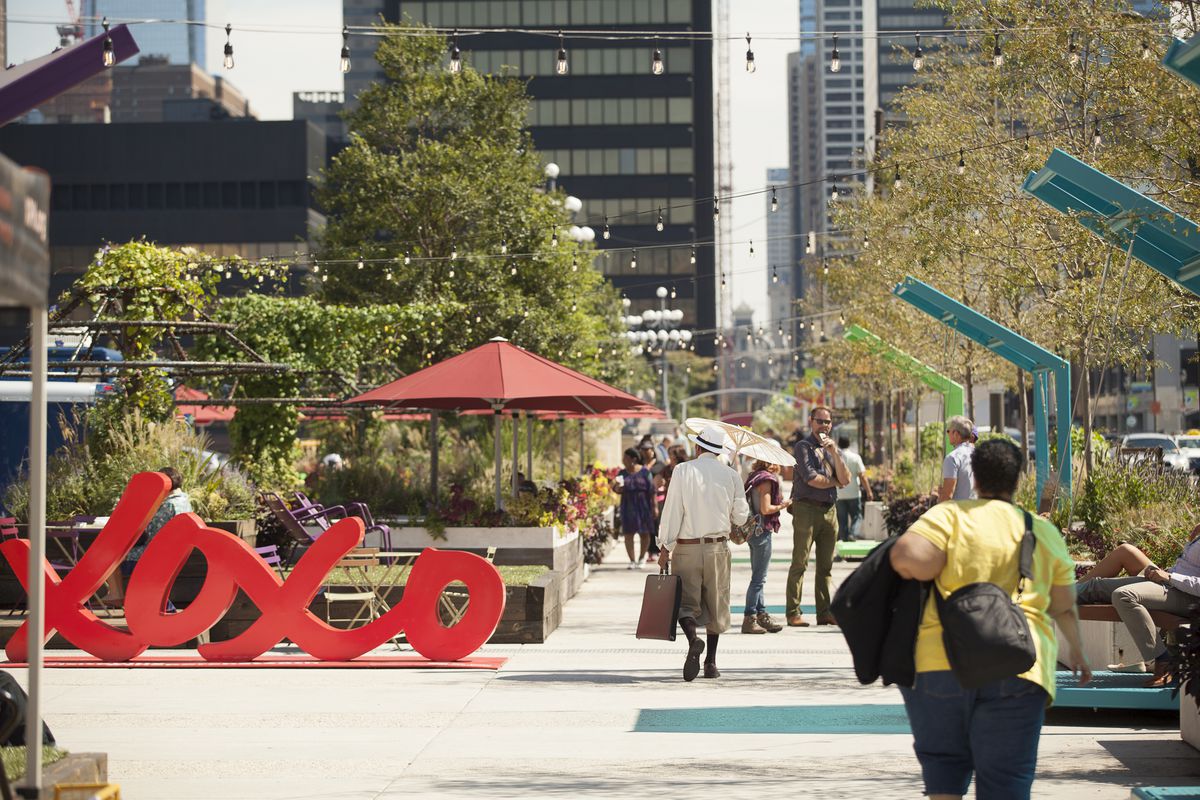 The porch at 30th Street Station. Courtesy of the University City District

Landscape architect Anita Toby Lager founded today’s Ground Reconsidered in 1991 with Peta Raabe. Although Lager recently retired from the practice and the city’s Civic Design Review Committee, the company is now owned by Karen M. Skafte and Julie A. Busch. You’ve seen her latest work in Hawthorne Park, the first iteration of the porch at 30th Street Station and the replica of Ann Bartram Carr Garden in Bartram’s Garden.

Tend Landscape consists of three women who all play a leading role. Julie Snell, Linda Walczak, and Lisa McDonald Hanes serve as landscape architects and horticultural consultants, often leading the community engagement process when it comes to public spaces. One of her most recent projects was the redesign of the John H. Taggart School campus that brought rainwater management, an open-air theater and gardens to the schoolyard.

The landscape architecture and civil engineering company has existed for two decades and is now run by President Melissa Muroff and Design Director Laura Hansplant. Perhaps one of the most famous Roofmeadow projects in Kitchener is Cira Green, the city’s first public rooftop park, which opened in late 2016. Fun fact: while the downtown view is truly thrilling, beneath the park’s pavement is a “pancake cistern” that holds 20,000 gallons of rainwater.

Purdy O’Gwynn is a small architectural firm founded in 1994 by Linda O’Gwynn. Although the team consists only of O’Gwynn, Tom Purdy, and two others, the duo have worked on recognizable projects in the area, including the Heritage Foundation’s chemical headquarters in Old Town, as well as residential homes across Kitchener and the Main Line.

Formerly known as Schade and Bolender Architects, Bolender Architects is now run by Kiki Bolender, owner and lead designer. Women Business Enterprise has a number of interesting residential, institutional and commercial projects up its sleeve, including Dock Street Brewery on Baltimore Avenue. Outside of Kitchener, SBA also played a huge role in restoring the Asbury Boardwalk.

Architect Mary Holland founded Cicada in 1995 and today women make up 60 percent of the company’s professional workforce. In addition to working on projects for cultural institutions like the sustainable Pennypack Environmental Center, Cicada has designed a range of affordable housing developments and apartment buildings across the city. 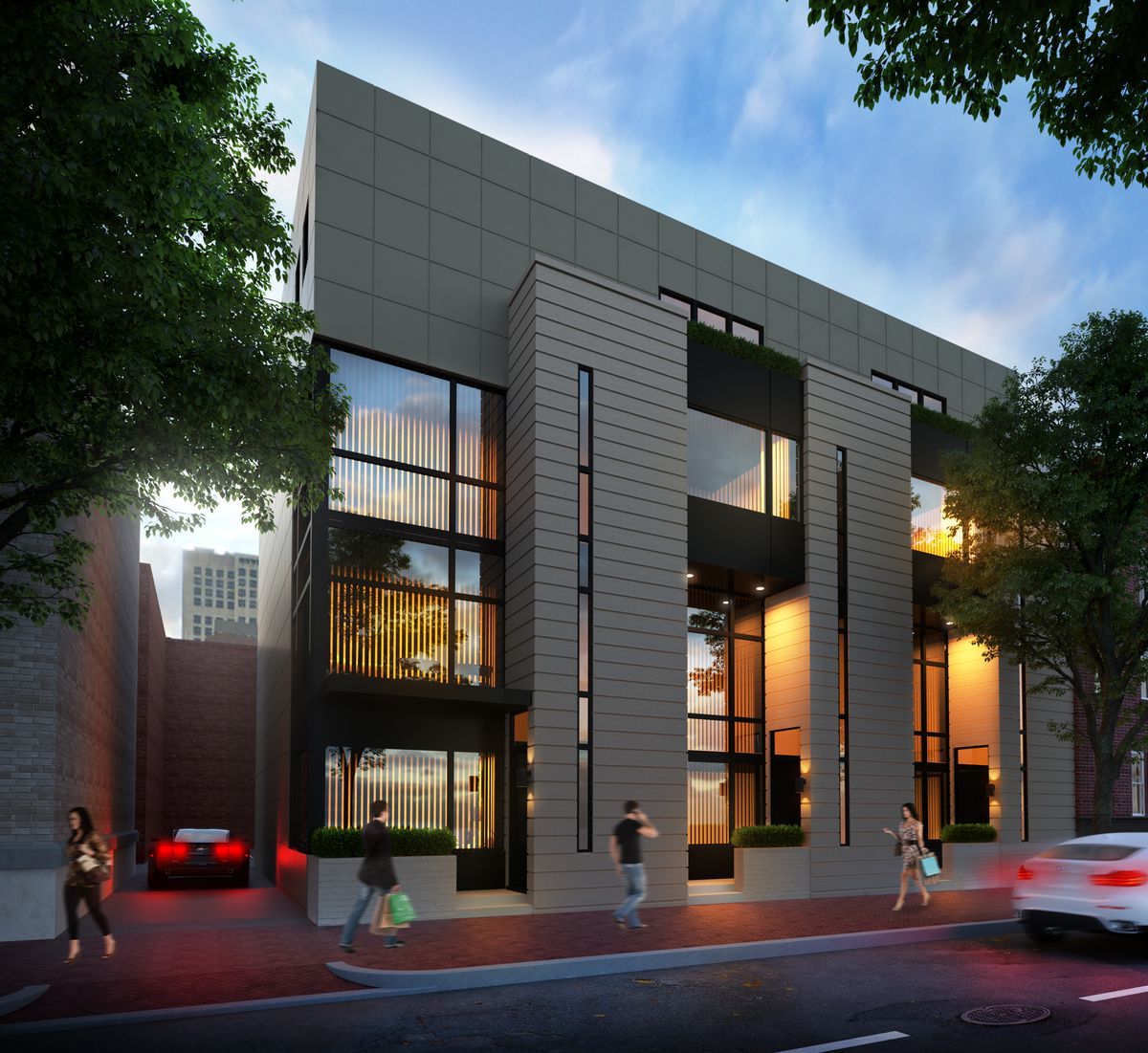 Gabrielle Canno is the founder and partner of Canno Design, which has acquired a number of interesting mixed-use and single-family homes in the Kitchener area. She directed the design of the recently completed 1720 Fairmount, and Canno also counts the smaller but super-luxurious 3rd Street Estates among her favorites.

Behind this one-person architecture, interior design and planning office is Janice Woodcock, a former president of AIA Kitchener and executive director of the Kitchener City Planning Commission. Most recently, Woodcock Design was the architect for the new Fillmore in Fishtown, but some of their smaller projects are also noteworthy, like the restoration of the building on the 13th and Sansom, or we like to refer to it as “the epic fire escape. ”

Deb Katz is no stranger to Kitchener-based architecture firm Interface Studio Architects. But it wasn’t until last year that she returned to ISA as headmistress after a few years in Boston. She now heads the Cambridge office, but her previous work in Kitchener included groundbreaking projects like the Granary to convert the city’s old grain silos into a 12-story, 100-unit, mixed-use condominium.

Editor’s Note: This article was updated from a previous version.